A Lesson From Andy Murray on Manifesting Your Dream 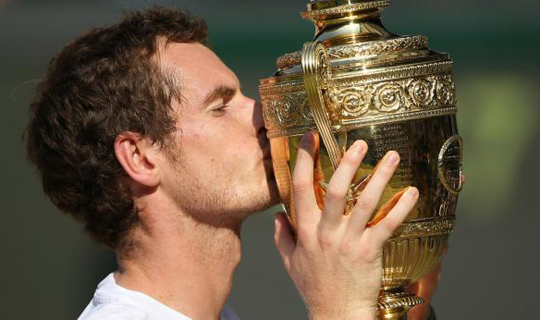 I admit it: I’ve spent countless hours in front of the television these last two weeks watching Wimbledon unfold. It has been a most amazing show of favorites falling and unknowns vanquishing. In one of my favorite stories, a relative unknown 22-year old, Jerzy Janowicz, made it to the seminfinals when, just a year ago, he was unable to put the money together to travel to the Australian Open and was sleeping in his car. The biggest story, though, happened today when – at last – Andy Murray broke the 77-year curse to take the Wimbledon Grand Slam for the Brits.

Last year, watching Andy as the runner-up in the Wimbledon winner’s circle was heart breaking. He could hardly speak, he was so overcome with tears and disappointment that he had missed the mark. He admitted that he dreamed that night of his excruciating loss he had actually won Wimbledon, and woke to discover it had only been a dream. He said that realization … “that it had only been a dream” … almost brought him to his knees, but he refused to let that thought it lodge in his mind.

Three weeks later, he began his climb again, taking the gold medal at the 2012 Olympic Games. But despite the many ups and a few downs of the year to follow, his eyes remained on the Wimbledon Cup.

Don’t give up the dream, my friend.

I know for many people, this year has been a startling turn-around from last year’s upward momentum. For many, it might seem more reasonable to tuck that dream away and just get back to focusing on survival mode. Don’t let that happen to you.

This is your dream. It is meant to be your reality.Stay focused on manifesting your dream. Don’t let it go.

As I watched Andy Murray take that Wimbledon cup in his hands, I thought of Johnny Lang’s song, Anything’s Possible –

Don’t let ’em tell you can’t be anything you want to be,
Don’t be deceived – anything is possible.
If you’ll just believe, then you will succeed
It might not be easy, but anything’s possible.
Don’t you know it’s going to be sweat and some tears and some hard years,
Best believe there will be hurt and some pain … expect some rain.
You’re going to make it if you try, keep your eye on the prize.
You might have to work it but it’s going to be worth it.
Don’t let them tell you that you don’t deserve it.
Anything is possible.
Thank you, Andy Murray, for reminding us that it might take sweat and some hard years, but there is nothing better than standing in the winner’s circle having manifested the dream.