How to Fill an Empty Bar 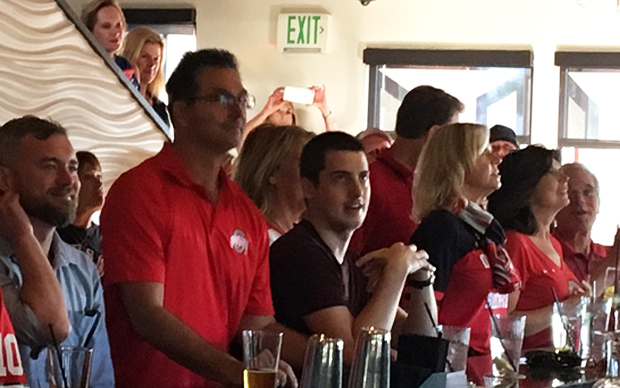 One of our restaurant clients here in Laguna Beach (Skyloft) has a very popular Roof Deck. It’s so popular, in fact, that most patrons will march up the restaurant’s entry stairs and, without looking left or right, proceed straight through the bar to the next flight of stairs that lead to the Roof Deck. While 100 people crowd onto the Roof Deck for its ocean and sunset views, the poor GIANT bar and dining lounge below sits alone and forlorn.

How to solve the conundrum? Well, when the restaurant’s owner returned from Ohio to tell me that he was expanding the Skyloft brand to a second location in Columbus, I said, “Awesome! Lets make ourselves an Ohio State Buckeyes bar … here in Laguna Beach.”

Turns out, though, that more than 7,800 Ohio State alumni live in Orange County, and more than 4,000 live in south O.C. where Laguna Beach resides. And, hundreds were already turning out to see Buckeye games at a large restaurant several miles inland. Surely we could get 20 or 30 people to sit in our main level bar with 25 TVs, right?

Two weeks before the first pre-season game, my team and I began working a multi-faceted push with online ads, regional P.R., newspaper articles, blog columns, a website page dedicated to “Buckeye HQ,” in-restaurant ads on the TV monitors, pennant flags hung all around the bar, local radio announcements, e-blasts, Linked In outreach to Ohio State alumni in the area, and more.

On that first pre-season game, I donned my new Ohio State t-shirt (I’m a Colorado Buffalos grad), grabbed a girlfriend who actually did graduate from Ohio State, and headed to my restaurant.
With trepidation.
And some amount of fear. I was certain that she … and I and maybe two other people … would be the only people to show for the game.

I was probably as surprised as my restaurant owners when more than 40 people filled the room that first evening. From there, the buzz just grew and grew. Big games brought in more than 130 viewers, while other games averaged 60 or 70 rabid, happy fans. They ate. They drank. They found new friends. They hung out in our main level bar – even on the most beautiful, sunny days – for 4 or more hours each game. And I was the den mother, greeting and hugging everyone as they returned again and again.

The Ohio State Alumni “inducted” our restaurant as an official “viewing party” restaurant and began sending us t-shirts, pom-poms, hats and more. We started business networking parties, too. We had another giant party for the Cotton Bowl, and expected to see a number of USC fans … but the place was filled with red-shirted fans singing the Buckeye fight song.

We’ve already begun planning for next year’s season but now it’s really not about filling a bar … we’ve created a fan-friendly tradition that is as exciting and fun for us as it is for our Buckeye fans. And that’s really what filling an empty bar is all about. Go Bucks!